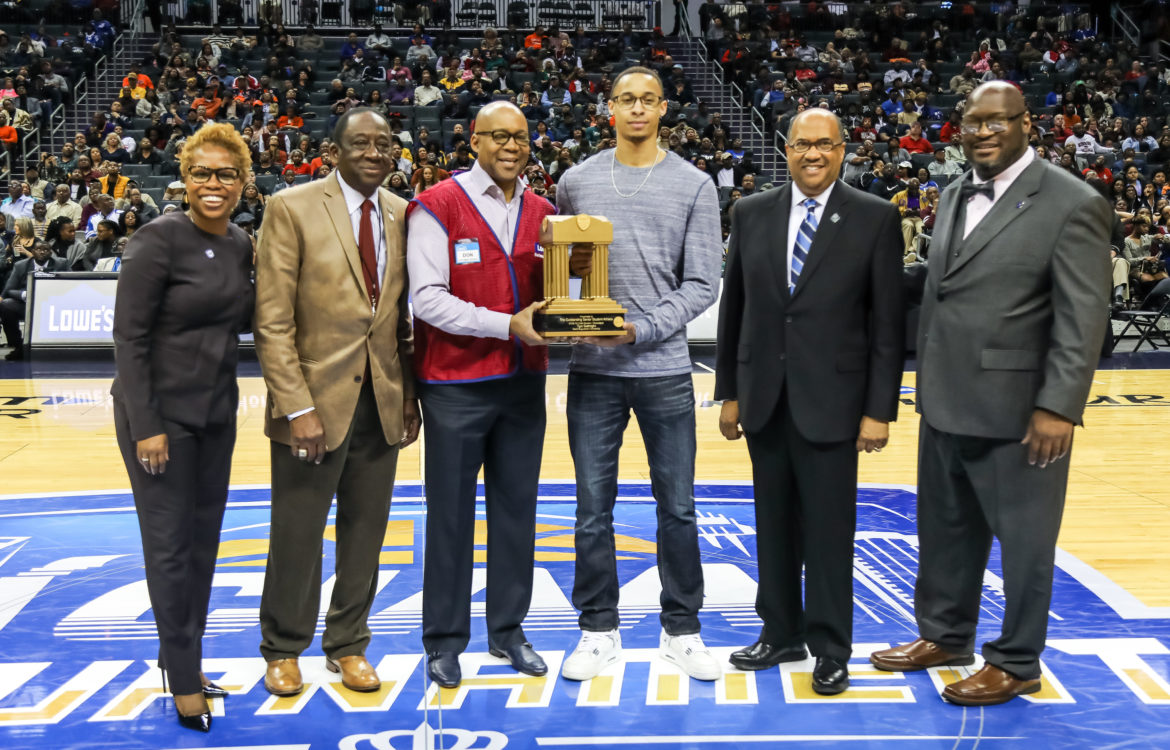 CHARLOTTE, N.C. (March 2) – Two-time All-CIAA guard Tyre Gathright (Sr./Wilmington, NC) of Saint Augustine’s University was named the winner of the 2018-19 Lowe’s Senior CLASS Award for men’s basketball on Saturday. The award, chosen by a combination of votes from CIAA men’s basketball coaches, CIAA media and fans, is awarded to the most outstanding senior student-athlete in CIAA men’s basketball.

An acronym for Celebrating Loyalty and Achievement for Staying in School, the national Senior CLASS Award was launched in 2001 to honor the attributes of college basketball seniors who remained committed to their university and pursued the many rewards that a senior season could bring. This season, Lowe’s brought the Senior CLASS Award to the CIAA to recognize senior men’s and women’s basketball players from the conference. In addition to the core requirement that a candidate be an NCAA Division II CIAA senior, the award winner is selected based on personal qualities that define a complete student-athlete. These areas of excellence are defined by the four Cs: Classroom, Character, Community, and Competition.

“It is a humbling accomplishment to be recognized for something that I love doing and have been doing since my high school days as far as community service,” said Gathright, who earned All-CIAA honors this season. “Also, having good character was something that I was taught and is always important to me. It feels good knowing that people voted for me based on who I am.”

On the court, Gathright earned a reputation as one of the top shooting guards in the conference. Finishing the season ranked third in the CIAA in points per game (20.9), Gathright regularly torched opponents with high scoring totals including a 40-point performance against Livingstone on Feb. 20 and a 32-point effort against Winston-Salem State on Feb. 9. Also earning all-conference honors as a junior, Gathright shot an impressive 46.6 percent from the field this season, good for sixth in the conference.

Also a standout in the classroom as a business administration major, Gathright maintains a 3.24 grade-point average and has earned spots on both the dean’s list and the scholar-athlete list at Saint Augustine’s University during his career.

“The Lowe’s CIAA Senior CLASS Award is a great accomplishment for Tyre,” said SAU Head Coach MarQus Johnson. “It shows that he is a good ball player and an even better person.”

While starring on the court and in the classroom, Gathright has displayed excellent character and a commitment to his community. According to Johnson, Gathright is the ideal student-athlete. He has prioritized service projects in the local community as a way of giving back and has assisted the Helping Hand Mission in Raleigh, N.C., with its annual Thanksgiving food drive. He also has provided mentorship to middle school kids in the Helping Hand program for Wake County Schools and coached middle school and elementary school kids in little league games at the J.D. Lewis Multipurpose Center in Raleigh, N.C.

In addition to Gathright, Virginia Union University guard Rejoice Spivey was named winner of the Lowe’s CIAA Senior CLASS Award for women’s basketball. Both were recognized on-court during the CIAA Tournament men’s and women’s championship games on Saturday.

“Lowe’s is proud to partner with the CIAA to honor these two senior guards who are not only outstanding student-athletes but great role models,” said Lowe’s Executive Vice President of Supply Chain Don Frieson. “Congratulations to Tyre, Rejoice, and all the finalists. We applaud their leadership and the positive impact they’ve made on the court, in the classroom, and in the community.”