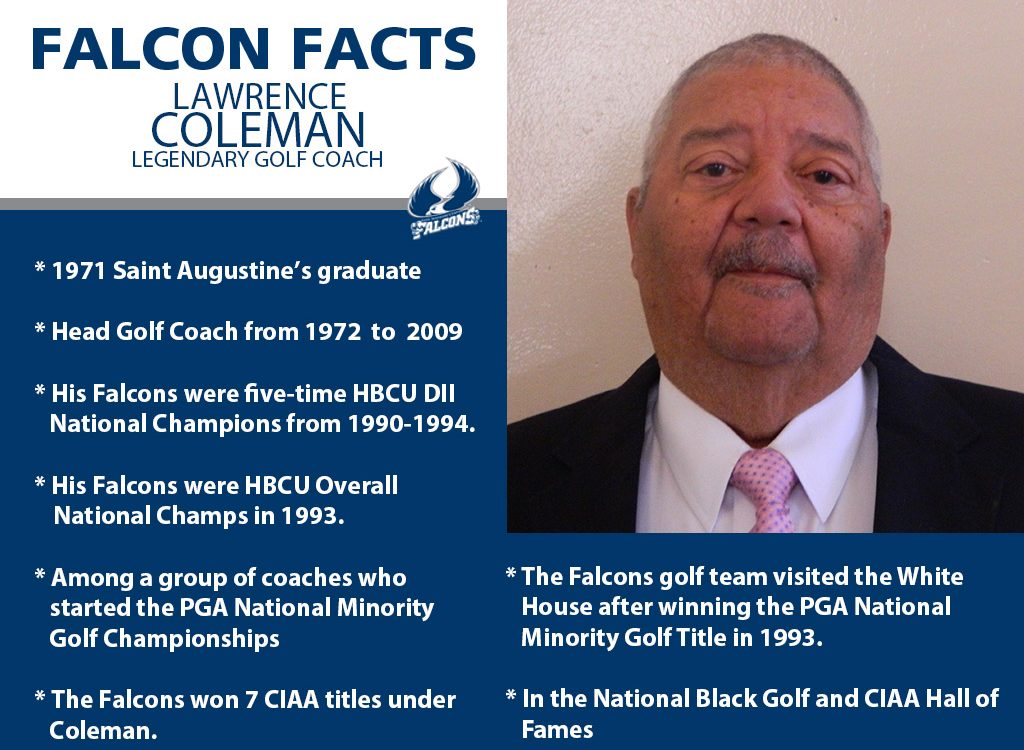 The Saint Augustine’s University Department of Athletics and Men’s Golf Program are saddened about the passing of legendary golf coach Lawrence “Peaches” Coleman on Thursday, June 3. Their deepest condolences go out to the family.

In February 2021, Coleman was featured on the SAU Official Athletic Website (saintaugfalcons.com) during Black History Month.

Below is a reprint of the article.

RALEIGH, N.C. (Feb. 22) – Lawrence Coleman is known for his nickname “Peaches” and better known as a coaching legend.

Coleman took over the reigns as golf coach at then-Saint Augustine’s College in 1972, one year after he graduated from his alma mater. He took the program to unparalleled heights, including six HBCU national championships (1990-1994), including five Division II crowns, and seven CIAA titles.

The Falcons won the HBCU overall title in 1993, which drew widespread attention for what resulted afterwards. President Bill Clinton invited Coach Coleman and his Falcons to the White House for their accomplishment at the PGA National Minority Collegiate Golf Championship, which Coleman helped start.

The Falcons coach retired in 2009 after 37 years at the helm.

His work didn’t go unnoticed. Coleman is in the National Black Golf and CIAA Hall of Fames.

Below is a Q&A with Coach Coleman:

How were you able to build the golf team into an HBCU national championship program?

Minority golfers were and still are hard to find; you don’t find many on high school golf teams. Recruiting was the key; fellow Falcons and friends who referred the golf program to potential recruits were a tremendous help.

Exposure was another method. Not only did the team participate in CIAA-sponsored tournaments, but also in tournaments along the East Coast. Often, the Saint Augustine’s golfers would be the only HBCU team participating in tournaments (schools such as the Naval Academy, UNC-Pembroke were the opponents). The team also practiced at local golf courses where fellow golfers were interested in the “team from Saint Augustine’s”. There were times when I reached out to major golf companies (equipment and clothing manufacturers) for support. We were always the best-dressed golf team and had top-of-the-line equipment.

How was the PGA Minority Collegiate Golf Championships created?

The NCAA was not inviting HBCU golf teams to participate in its tournaments, so a group of HBCU coaches (SWAC, CIAA) got together and decided to have their own tournament. Thus, the National Minority Collegiate Golf Championship was born [in 1987].

What are your fondest memories as golf coach?

The greatest and most important memory was when the team won our first CIAA Golf Championship for the school [in 1974]. The next big moment was when the team beat a Division I school (Jackson State) by one stroke. The victory crowned Saint Augustine’s as “National Champions”. This win got us an invite to the White House at the invitation of President Clinton.

What was it like being invited to the White House?

It was a great honor for all of us in the golf program. At that time, Saint Augustine’s was the first HBCU to get an invite to the White House.

What does Saint Augustine’s mean to you?

Why should a student-athlete come to Saint Augustine’s?

A student-athlete will get positive exposure, a good education and make life-long friends.