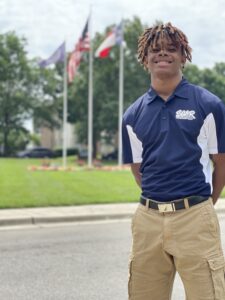 Durham native, Emanuel Orson Paschall III, a sophomore at Saint Augustine’s University majoring in Mass Communication, has received a $3,200 UPS Scholarship for the current academic year. The scholarship is provided by North Carolina Independent Colleges and Universities (NCICU) through its national partner, the Council of Independent Colleges (CIC) in Washington, DC.

“I’m extremely appreciative and I do not take the generosity of UPS for granted,” Paschall said. “I want to thank my family and Falcon family but most of all my Lord and Savior Jesus Christ for keeping me humble and allowing me spread my wings at this illustrious institution.”

Nationally, CIC provided more than $1.4 million in student scholarships from the UPS Educational Endowment to support student success at private colleges and universities. This year, the NCICU awarded $115,200 in these scholarships to 36 low-income, first generation, minority, and new American students at private institutions across North Carolina. Paschall is a first-generation college student.

“We deeply appreciate the continuation of the scholarship support made possible by the UPS Foundation established in 1953 and the distribution of these funds through Council of Independent College for a student attending each of NCICU’s 36 independent colleges and universities,” said NCICU president, Hope Williams. “Providing educational opportunities for students, who may be the first in their families to go to college, will have a significant impact on the next generation of leaders.”

About the Council of Independent Colleges

The Council of Independent Colleges (CIC) is an association of 758 nonprofit independent colleges and universities, state-based councils of independent colleges, and other higher education affiliates, that works to support college and university leadership, advance institutional excellence, and enhance public understanding of independent higher education’s contributions to society. CIC is the major national organization that focuses on services to leaders of independent colleges and universities and state-based councils. CIC offers conferences, seminars, publications, and other programs and services that help institutions improve educational quality, administrative and financial performance, student outcomes, and institutional visibility. CIC also conducts the largest annual conferences of college and university presidents and of chief academic officers in the United States. Founded in 1956, CIC is headquartered at One Dupont Circle in Washington, DC. For more information, visit www.cic.edu.

About The UPS Foundation

Since its founding in 1907, UPS has built a legacy as a caring and responsible corporate citizen, supporting programs that provide long-term solutions to community needs. Founded in 1951, the UPS Foundation leads its global citizenship programs and is responsible for facilitating community involvement to local, national, and global communities. The foundation’s philanthropic approach centers on four focus areas: health & humanitarian relief, equity and economic empowerment, local engagement, and planet protection. To UPS, giving means combining employees’ skills, passion and time with the company’s logistics expertise, transportation assets, and charitable donations to make a measurable difference in society.

North Carolina Independent Colleges and Universities supports, represents, and advocates for North Carolina independent higher education in the areas of state and federal public policy and on education issues with the other sectors of education in the state. It also raises funds through the Independent College Fund of North Carolina for student scholarships and enrichment experiences, provides research and information to and about private colleges and universities, conducts staff development opportunities and coordinates collaborative programs.  For more information about NCICU, visit www.ncicu.org.