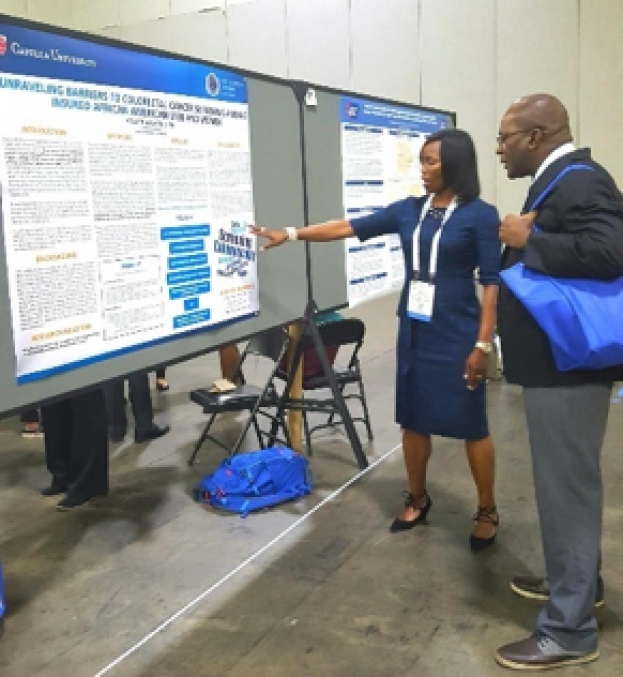 Dr. Kelcy T. Walker, Assistant Professor in the Department of Public Health and Exercise Science within the School of Math, Science and Public Health recently presented research at the Annual Public Health Association’s Annual Meeting & Expo in Atlanta, GA. This annual meeting brings over 12,000 public health professionals from across the United States and other countries.

This study sought to elicit dialogue with participants about their reasons to delay or refuse this preventive screening.  To gain insight, the researcher collected data through one-on-one interviews using a health beliefs model framework (Rosenstock, 1966). This approach explored the viewpoints and perceptions of African Americans as to their reasons for not completing this highly publicized (Colorectal Cancer Statistics, 2016), and highly effective preventive care screening (ACS, 2016).

A number of health belief themes emerged regarding why screening for colorectal cancer was delayed or refused by African American men and women for whom it was appropriate, including: a lack of knowledge about colorectal cancer screening, a perception of a lack of physician engagement in the process, the lack of culturally appropriate care availability, a belief in greater vulnerability to developing cancer among certain populations, a belief in a relationship between poor diet and colorectal cancer, fear about the screening procedure itself, and lastly, fear of cancer diagnosis.

The University is thrilled to have distinguished faculty such as Dr. Walker who continue to push their fields of research further while inspiring the students of Saint Augustine’s University.