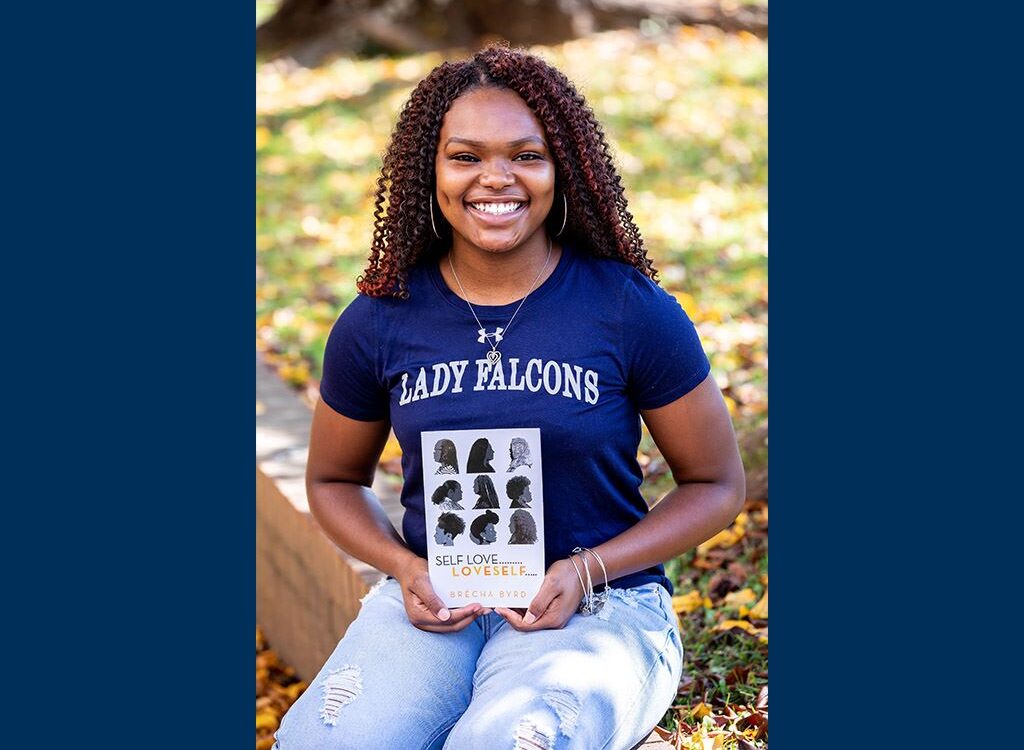 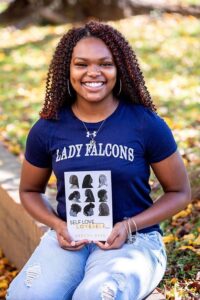 RALEIGH, N.C. – According to a website article, 80 percent of Americans aspire to pen a book and get it published within their lifetime. Few actually start or finish, however. Bre’cha Byrd bucked the odds and she’s only 18 years old. A basketball student-athlete at Saint Augustine’s University, Byrd is talented way beyond the basketball court. She is a published author and a motivational speaker. “Some people think you have to be 40 [years old] or 50 or 60 to become an author, but why not now,” said Byrd, who majors in Business Administration. The title is Self Love…LOVESELF, a 33-page inspirational book for females. Its purpose is to uplift young girls and women in the journey of self-love. The book’s inspiration comes from Byrd’s parents Brenton and Chanique, her brother Breyden and a higher power. “God gave me the vision and my family supported me,” Byrd said. “We live in a world where there is so much negativity. I want girls to know they are beautiful inside-and-out and they have worth. Their worth isn’t based on what others think.” Miss Lola Lakes is the main fictional character and much of her life is based on Byrd’s past experiences and what she has seen others experience. Byrd was picked on and lost confidence, only to regain her self-esteem with help from her parents. She now oozes with confidence and wants to empower other females. “Growing up, I’ve been through a lot as far as learning to love me,” Byrd said. “My self-awareness and self-worth were evident at an early age, and some people didn’t know how to deal with me. My mindset was completely different. I saw things for what it was and called them out on it. I wouldn’t comply to what everybody else thought. They couldn’t put me in a box.” “My parents always say, ‘tell my story’. I love writing, so why not,” said Byrd, who wrote songs and poems at 7 years old. “I want to be that positive difference. That book will always last forever, even when I am gone.” A prolific writer, Byrd started her book three years ago at age 15. The book was published in November 2019 and released in January of this year. Self Love…LOVESELF is in paperback form and can be purchased on Amazon and Barnes & Noble websites.

Her English teachers and other English professionals edited the book before it went to publication.

Finding a publisher is usually a tough part of the process, but it didn’t take long to secure the right deal. Her reaction when the book was published? “I said ‘Thank you Jesus!’,” Byrd said. “My family and I hugged each other. It was a beautiful day. It is a blessing to be a blessing. It was a different type of joy.” A native of Surry County, Va., Byrd has become somewhat of a celebrity. Recently, she spoke virtually to several organizations as a guest motivational speaker. She was already known for her basketball exploits, leading Surry County High School to three state championship finals in four years. A 5-foot-9 shooting guard, Byrd was named All-State and All-Region four times during her prep career. She was a two-time All-Region Player of the Year. During her senior season, Byrd became a state champion and was named Virginia High School League Female Athlete of the Year. SAU Head Women’s Basketball Coach Montel Jones says Byrd definitely fits the type of student-athlete he wants to represent the program. He says his prized freshman recruit is mature beyond her years. “It was amazing to a see a kid not in college yet who had already authored a book,” Jones said. “You know she is a high IQ student who knows about more than basketball. It is simply amazing. She already has goals that she has set forth.” “She will be successful in athletics and academics,” Jones added. “She embodies all the things we are fighting for as far as equality and women’s rights. Bre’cha is a strong, powerful black woman who is going after her goal regardless of what’s in front of her.” Byrd made an impression on Steven Artis, her assistant basketball coach at Surry County High School. Artis says the Lady Falcons got an impactful student-athlete who is a natural leader. “She was far ahead of the other girls in the thought process,” Artis said about his former pupil. “She speaks as if she was an old head. Bre’cha had her stuff all mapped out, and she believes God is going to direct her to do great things. She was speaking about this on a high school level.” “I was blown away. She was speaking as if she has been some places and seen some things,” he added. Naturally, her qualities made Byrd a natural choice as team captain at Surry County High.

“I put a lot of demands on her in making everybody accountable,” Artis said. “She said, ‘Coach I am already on it.’ She embraces leadership. When stuff was going down, she would have team meetings. When you see things like that coming from a young lady, that tells me a lot about her on and off the court.” “As a basketball player, she is determined, feisty and very smart,” Artis added. “She picks up things very well and has self-motivation which carries over in her writing a book.” When asked what gives her more joy, basketball or writing, Byrd says the end result is what’s important to her. “I live to inspire in everything I’m involved in,” Byrd said. “I want to give the world the best of me.” And she’s doing it as a teenager. “You do not have to wait until you are older,” Byrd said. “You can go after everything right now. I am a symbol of that. There are no limits. Each of you can inspire anyone, no matter the age. You are never too young to make a change.”