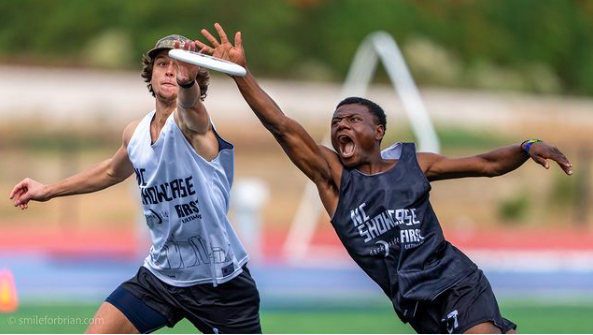 October 30, 2022 (Raleigh, NC) – History was made in the George C. Williams Athletic Complex on the campus of Saint Augustine’s University (SAU) on Sunday afternoon. The upstart SAU ultimate (frisbee) team, the first HBCU ultimate team in the country, played host to two-time defending national champion, the University of North Carolina at Chapel Hill (UNC) Darkside squad in front of an enthusiastic crowd.

The match was put together to showcase the sport of ultimate to the SAU campus community, as well as to provide an opportunity for the SAU team to experience the highest level of ultimate competition. The event was sponsored by Triangle Ultimate, Tokay (footwear), and BE Ultimate (sportswear.)

UNC prevailed in two spirited games (7-1, 9-2). However, a handful of near misses on several long SAU throws made the games feel much closer than the score indicated. Juma Wilondja (JR) scored twice on two diving catches for SAU. Nicholas Young (FR) made a toe-tapping catch at the back of the endzone in the second game for the home team.

“You can really see the potential in the team, especially as our disc skills further develop. The school has a lot to be proud of with this group of guys. They’ve only been playing the game for about 6 weeks but still had the courage to step on the field in their first match against the best collegiate team in the country,” notes Dr. Mark Janas, professor in the School of Business, Management, & Technology and leader of the SAU club sports program.

The SAU ultimate will begin official league and tournament play in Spring 2023. For more information about the team, visit https://www.sauclubsports.com/ultimate.