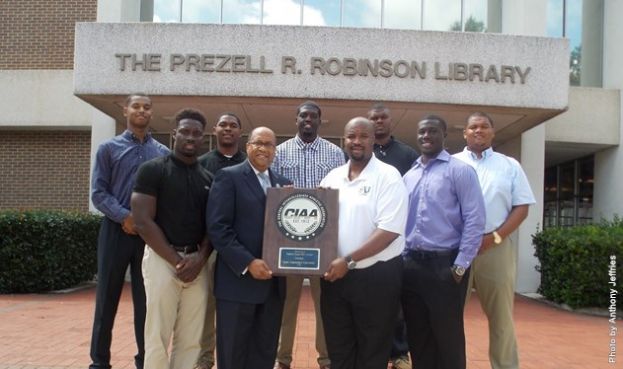 The first game is one week away, but the season is off to a rousing start for the Saint Augustine’s University football team.

The Falcons received a plaque Friday, August 21, 2015, for having the highest grade point average (GPA) of all the CIAA football teams during the 2014-15 athletic season. The honor is the third straight for the Falcons, who earned the award five of the last six seasons.

The latest academic achievement comes under the direction of Head Coach Michael Morand. He says the accolade shows that Saint Augustine’s University is serious about education.

“I am proud of what our team has accomplished,” said Morand, whose squad posted a 2.7 cumulative grade point average in the 2014-15 season. “This says a lot about their commitment to academics.”

Morand praised Tim Chavous, the running backs coach who is also the team’s academic coordinator. The Falcons began their three-year streak of CIAA academic honors since Chavous joined the football staff. Much of the credit, Morand says, goes to the “scholar-athletes” who aspire to excel in the classroom as well as on the football field.

“Getting good grades is just as important as winning games,” Morand said.

The plaque will be on display at the Prezell R. Robinson Library on campus. Saint Augustine’s University also won the CIAA team highest GPA award in baseball, women’s basketball and women’s volleyball for the 2014-15 season. Their plaques will also be in the library display case.